The allure of a Jaaaaaaaag

Apparently when you get to my age, you get a Jag. This is my second after an S-Type I had for a few years.
It’s a 1995 XJ6 4.0 X300.
As a bit of history the X300 was the first Jaguar that was fully funded by Ford. The previous XJ40 benefitted from a bit of Uncle Henry’s cash towards the end of its life.
What this means is that the X300 was fairly well made, and reliable (in comparison to other XJs at least).
The X300 used the last iteration of the AJ6 engine, which had replaced the old, famous XK6 engine. The AJ16 was a twin cam 24V with fully electronic engine management, and in 4.0 form managed about 250 brake with about 290 lb/ft of torque. The 4.0 engine was also the basis of the XJR, Jag’s bonkers supercharged bruiser.
Roll on about 25 years later and X300s are pretty much at the bottom of their worth curve, but this won’t last forever. It’s a shame that Jag saloons have a pipe and slippers image, as well as a reputation for expensive repairs. In reality, it’s bollocks, unless you’re buying something very badly looked after, or something with a diesel engine in it. In my experience they’re no less reliable than most old cars.
Anyway, mine’s a tad rusty, required a replacement gearbox because I killed it by dropping it into D at about 3000rpm. Rust is probably the biggest killer of X300s, Ford might have spent a fortune but they still couldn’t stop them from going rusty. 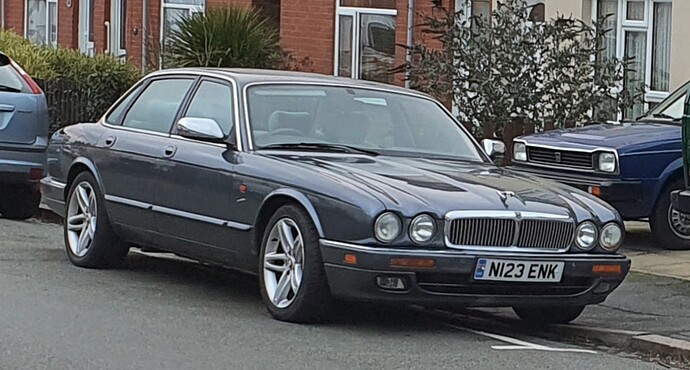