NB Randal Cowl intake. Pretty much the closest thing to ITBs/Carbs you can do on a stock NB ECU. Makes a lovely loud intake noise, and sucks in force fed cold air from a high pressure zone while you’re moving, so could possibly maybe give a legit power gain too (probably not a lot though).

Instructions: Remove or bin stock air filter box or whatever open cone filter you’re using. Remove or relocate stock washer bottle (if removing then fit whatever alternative washer bottle set up you’re using, if relocating then relocate that sucker). Bend ABS lines to make room for 3" hole in scuttle panel. Drill an IAT sized hole in the crossover pipe and a 3" hole in scuttle panel (make sure it’s above the bottom of the scuttle panel so it doesn’t suck in water). Paint the hole to stop rust. When the paint’s dry, feed the intake piping through the hole (mines a little over 3" so once crammed through its unlikely to fall out). Attach “carbon” filter to end of MAF, and to intake piping. Go drive and laugh at how loud a cheap-ish intake system is, all while probably maybe making like 1-2hp extra.

Rough prices: £20 for the “carbon” filter and tubing, £5 for the cam cover breather (not needed on an unmodified crossover pipe), £30 for a 2nd hand scuttle washer bottle (plenty of DIY’s around to make one out of something else for less money, or relocate your OEM one so it’s not in the way), £5 for a 3" hole saw and a IAT sized drill bit, £0 to bend some ABS lines by hand.

Total cost: Appx. £60 and like an hour of your time at most (not including watching paint dry, go play Grindr or whatever it is MX5 people do in their spare time).
The joy of having stupid intake noises on your crusty shitbox: priceless (with the bonus of a somewhat tidier engine bay and maybe an extra hp or two). 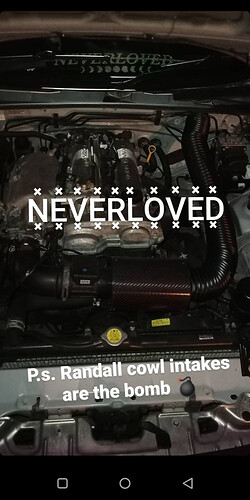 P.S. I really need to take a better picture of my engine bay!

should get you on the blogs
I’m thinking about doing similar on mine… Well kinda similar, would be feeding to the super charger, and there is no scuttle panel any more.

Ooh, could do a fog light or bumper ducting on yours? Should sound absolutely mental with a supercharger, provided the whine isn’t too much!

From what I recall the rotrex doesn’t whine too loud.

After reading your post I went and did some more research. And I think I have a plan

although I will be feeding from the front like you just mentioned. Need to get some measurements done when I’m in unit tomorrow

The cowl intakes work really well with a supercharger.

Way easier than trying to get a decent sized hose to the front of the car too. Nice work!